Story of Capt. Isaac Ike Camacho why not the Medal of Honor? Sir Ike was the First POW to escape from a Vietnamese Prison Camp having been held for over 18 months. 1964-65. He was held with others including Capt. Donald Cook Who was presented with a posthumous Medal of Honor and Ship named after him USS Donald Cook. It was Capt Cook that gave Sir Ike the ok to escape. The whole story of Ike and his escape can be read in the book written about the escape and time. This post is concerning something I/we have been working on for few years and need help.

Ike was put in for the Medal of Honor by his commander for efforts on day of capture. Saving Commander and going back in Camp to continue to fight and help save all Green Beret’s left before being hit in head and ending up in a field, expecting to be shot. 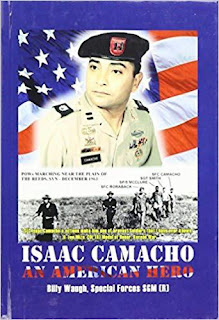 Ike received the Silver Star and Years later was upgraded by Pres. G.W. Bush to the Distinguished Service Cross. Now the problem is an award can only be upgraded once.

When we worked on the upgrade with all the facts and paper works that showed Ike was first put up for the Medal of Honor, we didn’t know that fact.

We refuse to give up on anything! We’ve held a POW/MIA Awareness Vigil here in Meredith NH for 31 years and Biker Freedom Ride for 29.. We Never Walk Away.. Problem here is our feeling why Sir Ike didn’t receive the Medal of Honor!! #1.. putting time in perspective now, Ike is Mexican, in 1965 not many Medal of Honor’s given out and to have the first given to Mexican? Just a thought! #2. Ike and All Those POW’s were held by North Vietnamese Army and "Cubans"! How would you write that up then and nothing in his awards that mention that today. Ike lived every day with those Cubans trying to catch him, proving he didn’t understand what they were saying
!! Wouldn’t have played well for him.

The story how he survived is in the book and the info he brought out was priceless. An America Hero! Yes, who deserves the Medal of Honor he was put up for. Because of reasons beyond disgusting in my belief and heart , should be changed and a terrible Wrong be Righted for this Vietnam Veteran True Hero!!

I think the 5th Special Forces would Agree and I Thank another Hero for all the help..The Most Special Billy Waugh! The Man who brought down the “Jackal”!!

Posted by nhbluestarmom at 11:45 AM No comments: